← Was Shoghi Effendi gay?
Who is a Covenant Breaker ? – Orthodox Baha’i Faith Views →

Since the establishment of Universal House of Justice in 1963 at Baha’i World Centre, at Haifa the Baha’is cannot make any departure from the norms and the procedures lay down by the UHJ. No amount of failure or development of progressive ideals can supersede whatever is written in the Messages/letters of UHJ.

There is a wide divide between the democratic ideals of equality and freedom, rights of citizens, individual liberty and pluralism cherished by Baha’u’llah, Abdul Baha and the rigid format of governance envisaged by the Self centric and anti-pluralistic Universal House of Justice.

As a result, most of the Baha’is have remained isolated from the Baha’i Holy writings of Central figures of the Faith. The widespread and disproportionately higher level of intolerance shown by Universal House of Justice for all other ideas and thinking and fear of excommunication have made the Baha’is to examine the claims of other Sects of Baha’is and to take solace in them especially the one having  Universal House of Justice.

The terrible failure of Ruhi books curriculum and humiliating court case defeats resulting into NSA  attorney Mr. Christopher Dolan begging the Sects leader to have a compromise and to find a way out for such a humiliating situation has  put further question mark on the UHJ’s claim of infallibility.

The dissatisfaction amongst the Baha’is is brewing up against the policies of UHJ. The Baha’is worldwide are thinking that Ruhi system has arrested the growth of Baha’i community worldwide because of its useless Ruhi Books and Ana’s presentation. The Baha’is think that the world requires Holy writings as the mean to affect the hearts of the people rather than a jumble box prepared by a former NSA member and counselor of Columbia. In fact Dr. Arbab did not resign but he was sacked by UHJ for forming a group inside UHJ to control and manipulate it. Lately this group is given the name of Ruhi brigade comprising of Arbab himself Faredon Jawaheri, Payman Mohajir second seeded Mr. Sheriyar Razavi, Paul Lample and Gustav correa.

In this system a highly successful Professor in a University or a Baha’i from a respected Family who served the Faith with distinction for the whole of his life whose two family members have served as Counselor are supposed to go through the rigorous courses of Ruhi Book where a 15 year Old girl appointed as Teacher will teach you the tenets of Baha’i Faith. Any disagreement from this system will make you a recipient of a warning letter from the House of JUSTICE .The language used in the letter will make you further reflect that whether the letter is written by the custodians of the Faith or an international Terrorist organization threatening you to come in line with the UHJ or get ready to be declared as Covenant breaker. 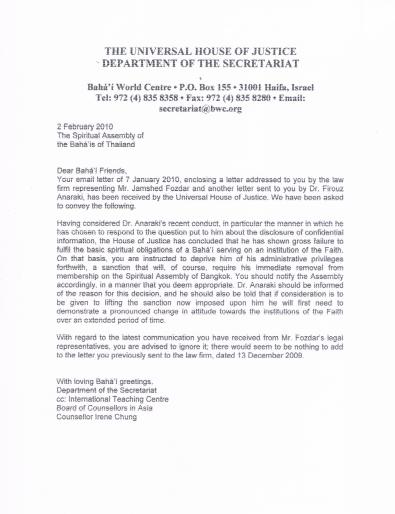